Clinical data acquisition and reconstruction protocols are well established for 18F-FDG imaging and a few select other tracers. However, establishing guidelines for acquisition and reconstruction in novel tracers is often a “best guess” proposition. In this study, predictive modeling and simulation were used to inform protocol design for a novel, diagnostic radiolabeled peptide.

Identification of the task for which data are being acquired is an important prerequisite in study design.  For this study, the task was to optimize estimation of the underlying antigen density and vascularity for lesions within the liver. Using the XCAT phantom as a starting point (courtesy of Dr. Paul Segars), a digital object was created comprising background, liver and three lesion compartments. Measured preclinical data were used to derive time-activity curves for the liver and background regions. Invicro’s custom tumor pharmacokinetic mechanistic model was used to generate time-activity curves for the embedded lesions with varying known antigen density and vascularity values. An example rendering of the phantom with 3 embedded lesions and their corresponding time-activity curves is shown in Figure 1. 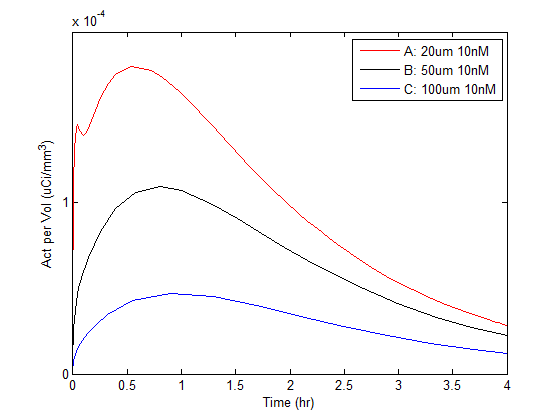 The Known lesion locations were used to extract time-activity curves from the simulated reconstructions. The mechanistic model was used in a fitting routine to estimate the underlying antigen density and vascularity values from the time-activity curves. The various acquisition and reconstruction conditions were evaluated based on their success in returning accurate estimates of the known antigen density and vascularity values.

The model was found to be robust to acquisition and reconstruction conditions in this estimation task. Longer scan times did tend to produce more accurate estimates, however, other factors (e.g., time per frame) did not significantly effect estimation performance. The single largest factor influencing accurate estimation was the use of an appropriate partial volume correction method, owing particularly to the large amount of spillover from the blood signal in the liver at early time points. Ultimately, Invicro’s modeling and simulation methods were a crucial tool in influencing the clinical protocol design for the first human imaging of a novel diagnostic peptide.